The modern-day toggle light switch – you know, the one that flips up-and-down that you grew up with in your parent’s home before you got all hip and modern and installed a decora-style dimmer in your own place – was invented by William J. Newton in 1916. I’m sure that back in the day, the folks contemplating replacing their “modern” John Henry Holmes switches – “offering the finest in guaranteed not to kill you lighting control since 1884*” – in their homes felt this new toggle switch was akin to sorcery and probably expected to be zapped by 110-volts every time their flipped the lights on and off. (* Probably not actually their slogan) 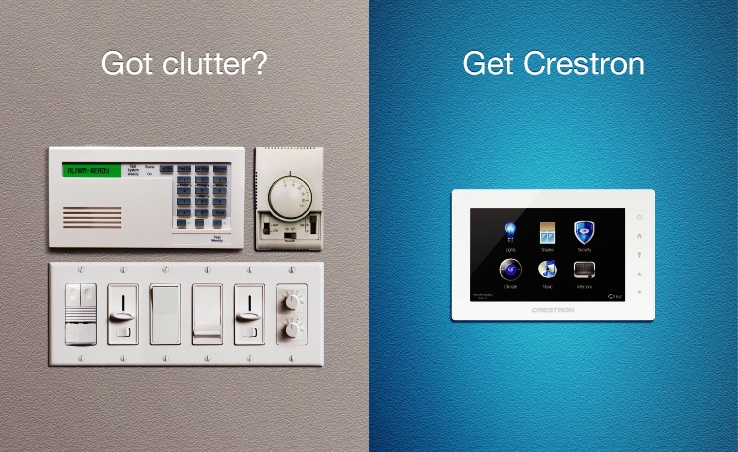 Today, technology’s steady march has not turned a blind eye to lighting control, and we have lots of cool options to control virtually any lighting load – incandescent, fluorescent, halogen, CFL, LED, electronic low voltage, sharks with frickin’ laser beams – you can think of. Even still, most people are controlling their lights in much the same way as in Holmes day; getting up off the fainting couch and turning them on and off one at a time.

Now, sure, if you like living in the past, this is a great way to do it. Equally great is churning your own butter and washing your 1000 thread count sheets by beating them against stones down at the local crick. And there are probably some great reasons for not automating your lights and bringing your home into the 21st century. In fact, here is a list of the top 7 Reasons NOT to install automated lighting in your home:
1. You are hoping to get your home listed on the National Register of Historic Places.
2. You live in a Tiny House that literally has only one light switch.
3. Your father owned/ran the local electric company and on his deathbed made you promise to use as much electricity as possible.
4. You are fabulously wealthy and employ a personal lighting butler whose sole job is to go through your mansion setting lighting levels.
5. You are *super* committed to getting your 10,000 daily FitBit steps in and relish each trip off the couch to turn lights on and off.
6. You are convinced that Terminator was really a documentary and that giving technology even the smallest foothold will help to realize Skynet.
7. You live in a cave in Tora Bora and don’t want to make things any easier for the Navy SEALs.


If none of those sound like you, then congratulations! You’re totally a candidate for automated lighting!
Automating the lighting in your home is a lifestyle improvement that once made is tough to ever go back from. Similar to using a universal remote control to operate your entertainment system, automated lighting simplifies control, allowing you to control one light, groups of lights or every light in your home with a single button press, or while you sleep, blissfully unaware of the powerful technology working to improve your life. Heck, you can even control them by using your fancy smartphone or tablet, an idea that would have gotten you burned in Salem for sure!

Here are three key benefits you can enjoy by automating your lighting:
Scenes Set the Perfect Mood
Whether it’s “Dinner Party,” “Goodnight,” or “Let’s Get it On,” lighting helps set the mood around your house. (So does music. But that’s a topic for another day.) And instead of having to walk through each room of your home individually turning lights on and off and dimming or raising them to get the right ambience, an automated lighting system lets you recall the perfect lighting scene every time with the push of a single button. Create the scene once and then never do it again! No more will you have to live with the shame of having your classic ‘80s Nagel being light to only 46% instead of the full 61% that really captures all of the artists’ colors and visual elements. Never again will the bedroom light’s full, harsh intensity reveal the years of neglect you’ve shown your body, instead lighting you in a cherubic and majestic warm 15% glow.
Perfect Lighting Any Time of Day
Want to make sure that your outside lights are on for security at night? But also hate coming home at 5 PM in the summer and finding that they’ve been on all day long? Those puny 100-watt bulbs trying to outshine the 1.6 billion candelas per square meter of the sun! Like to leave a dimmed kitchen nightlight on, but only after 11:30 and then off at sunrise? With an automated lighting system you can have lights turn on and off at specific times each day, or automatically change in response to the rising and setting of the sun through the use of an on-board astronomic timeclock. (Understanding Stephen Hawking’s works totally not required!) You can also set different events for weekday and weekends, ensuring that not one stray scintilla of light affects your Sunday morning sleep-in.
Help Save the Planet
Even when set to “full blast,” every dimmer saves between 4-9% in electricity usage compared to a standard light switch. Factor in the additional energy saved by dimming lights even a few percent – your eye likely can’t even the difference between 90% and 100% light levels, but your power meter sure can! – and then multiply that savings over the 20, 50, 100 dimmers throughout a home and you’re talking about some real savings. Go ahead, buy that 6-pack of ultra-premium, oh-so-delicious Stone Brewing Co craft beer! You’ve earned it! Further, dimming will lengthen the life of incandescent and halogen bulbs, meaning you’ll replace them less often and cut down on adding waste to the landfill. Your children’s children may not thank you, but, well, they’ll probably resent you a little less.

The other terrific thing about automated lighting systems like URC’s Z-Wave®-based Vivido? It is totally, 100% retrofittable into virtually any home. (If your home is *really* old and wired with aluminum wiring instead of modern, copper Romex, then you might be out of luck. Also, spoiler: aluminum wiring is 55 times more likely to catch your home on fire. So, ummm, yeah.) This means there is almost no excuse to not update and automate.

Please call us for your personalized in-home consultation!

MONACO AV is specialized in creating Crestron smart home automation and home theater which includes whole house music, whole house video, climate control, lighting , shading, and CCTV surveillance. We are regarded as one of the best Crestron dealer in Los Angeles area and have been in business since 2005.  We have done numerous successful smart home automation projects in Los Angeles, Pasadena, La Canada, San Marino, Hollywood and many more.